I’m temporarily plumbing depths of procrastination and self loathing that I haven’t seen since my thesis.  I should be writing testimony for the Colorado Public Utilities Commission to ignore right now, but I’m not.  Because it seems futile?  Because it’s so impersonal?  Because the box we’re supposed to stay in is so small and lame?  Maybe this means it’s time for a more different job. 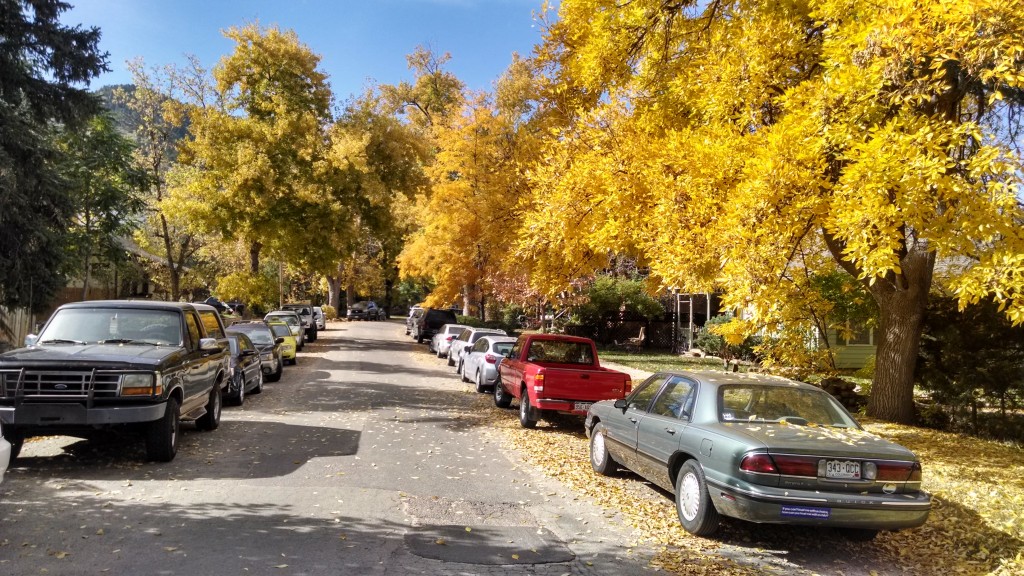 Some folks who lived at Masala when I moved in are moving back to Boulder. I didn’t get to know well enough before they left and got married and reproduced.  I’m looking forward to getting to know all three of them better.  To maybe having a persistent interaction with a kid.  And an excuse to make a bike that carries kids.  Always looking for an excuse to make another bike.

Some good friends are leaving the co-op, pulled away by academia.  Social churn and transience.  It seems strange to be the stable one.  Only person in the house that’s been here longer than me now is Lincoln, Our Founder.  It’s interesting to see how the relationship with the house changes over time.  Still love it, but would be up for another incarnation too.  With more stability and people who have all already learned the basic lessons of living together… rather than always having a few people that don’t quite seem to get it.  We have most of the money and people that would be required to buy our own place and make it a co-op.  But that would be illegal.  Which is infuriating.  So we’re trying to change the law, but it feels like a distraction — I’d much rather do the work of creating community itself, instead of the meta-work of making it legal to live in communities. 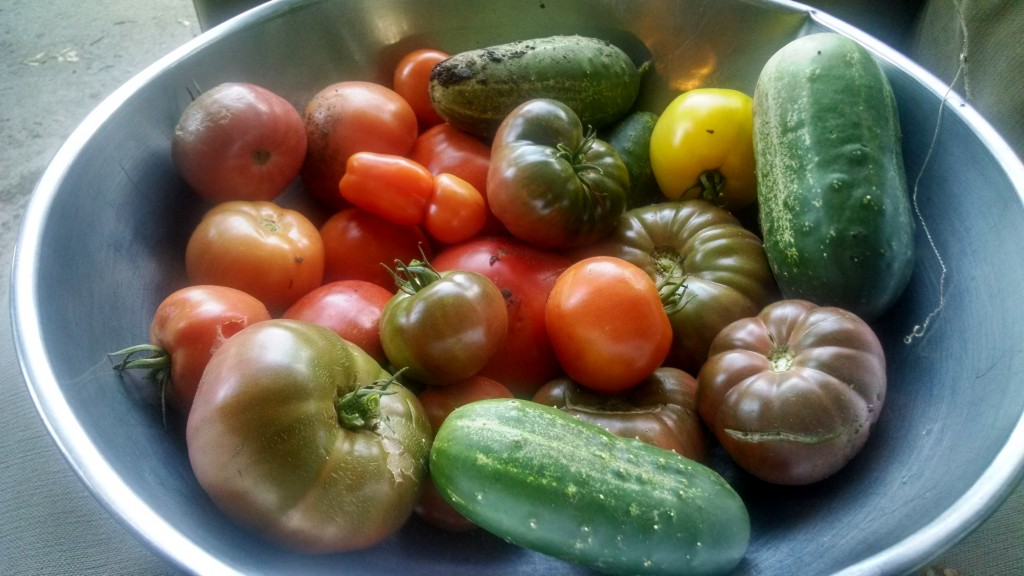 The long slow fall has been wonderful.  Golden leaves and freakishly warm days juxtaposed against each other.  I sleep out on my little deck every night and watch the stars slowly wheel across the sky as the season changes.  Orion and the Pleiades.   It’ll be snowy soon.  The weather could be completely different in a week. 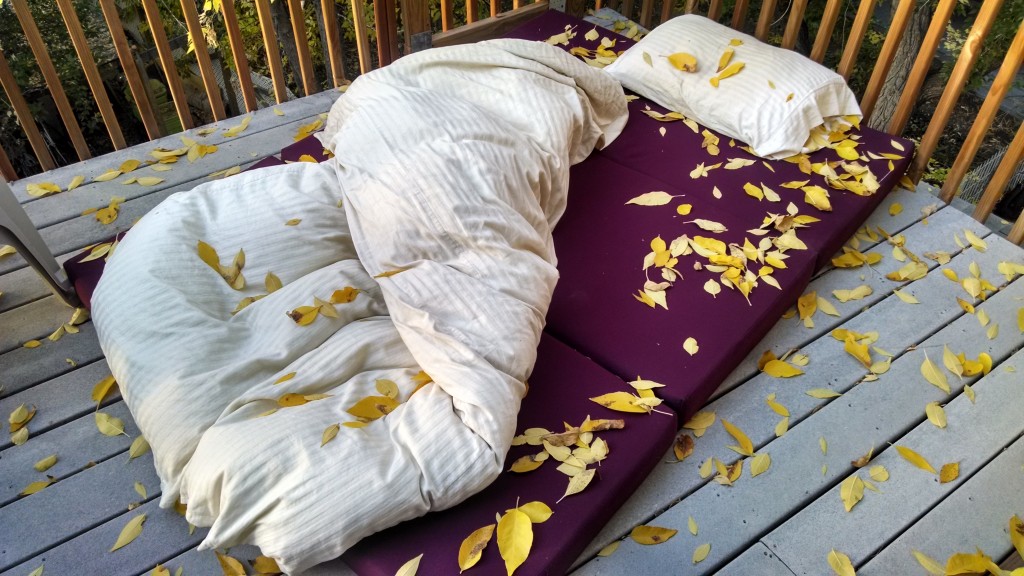 It’s been a celibate year.  The first once since 2001-2002.  More than friends, less than lovers, and back to singledom.  I’ve felt old this year — a pinched nerve in my neck, lots of gray hairs.  I’ve also felt superhuman — a 150 mile bike ride across the continental divide and back.

I need to read more books.  I’ve even thought that maybe I need to write a book: Amateur Earthlings.  The two might go well together.  Long form ideas are the best.  Impossible to hold in your head all at once, but wonderful.

I need more quantitative folks in my social sphere.  More scientists and engineers.  I miss being embedded in a microculture that not only values that kind of knowing, but where it’s the default — where there’s an underlying assumption that people can understand the world that way.  Not to say that it’s the only valuable way of knowledge… but it’s my way most of the time, and being outside of that sphere makes me feel like an outsider.

Local politics is both fun and frustrating.  I’ve made enemies for the first time.  People who actively want to undermine me because of my ideas and values and willingness to participate.  That’s been an interesting experience.  There are also unexpected, almost uncomfortable allies.  It’s interesting to work with someone on something you agree on, while knowing that you disagree on something else, and might end up working against each other there. And of course it all feels glacially slow.  There’s always that voice the the back of my head that wants a revolution.

And always that voice in the back of my head that wants a bike tour, too.

Do I fall in love too easily?  Foolishly?  Frequently?  It’s a funny think to think about.  How often do you want fall in love?

Falling in love is emotionally immersive.  Careening toward another human being, drawn down into their gravity well, and like diving into a black hole, you never quite reach the center.  There’s always a little bit of distance left to bridge.

Fall in love too rarely, and it might mean you’re alone.  Yearning.  Isolated.  Or it might mean you’re in love.  Attached.  Satisfied.  If you’re falling in love frequently, you might be skipping from one partner to another.  Always falling, always missing.  Addicted to the plunge?  Deceiving yourself about the connection and running away when it fizzles? Or in our strange little micro-society, it might mean the tendrils of your love are many and branching. Mercurial love, as a non-rivalrous (public?) good.

When it’s rare, it feels precious, and something about that feels good.  But the spaces in between are lonely.  I put my loves in bins, retrospectively.  Was it real?  Or a delusion?  Why is it so hard to tell at the time?  Or does it depend on how it ends?  Mostly I think it correlates with the dreams I had while in the thick of it.  The involuntary visions of a future together.  Expectation.  Mother of disappointment?

In hindsight, I had three loves in the first decade of this century.  Two thirds of them reciprocated.  Is that too many?  Or too few?  Seven years were dedicated to just one of them — they were rare by virtue of stability.  Two loves in the other three years.  One love every 18 months?  If I were finding one new person that I felt deeply connected to every year and a half, and if they were accumulating around me in a pile, then that would feel opulent.  It only takes a few other people for me to feel awash in a sea of emotional interconnectedness.  Maybe I’m sensitive that way.

But by and large, they don’t seem to accumulate.  Partly it’s the serial nature of our connections.  The broader societal norm is that you connect to one person at a time, in sequence.  And not just in the sense of monogamy — there’s a more pervasive kind of seriality, in that most of us in America don’t spend most of our time embedded in a densely connected social network.  For the most part, we seem to have fairly disconnected social domains — work, school, family, friends — sorted by context and activity.  Even within each of those, we often find the hub-and-spoke topology.  Each person as the center of their own social universe, and able to cut loose a connection gone bad with modest impacts on the overall structure.

So I’m thankful to be immersed in Boulder’s cooperative scene — dozens of people with a mass of connections between them.  It’s something like what I’m looking for.  I work and live and play with many of the same people.  But it still has a feeling of transience.  Ephemeral. Changing.  People come and go, even if the network has some durability.  Not everybody comes and goes of course — there are some people who have decided to make this place their home.  We need a way to make that community concrete.  To put down roots.  We want to make and own a home together.  A base of operations.  A hearth and table.  An all star team?  A family of friends.  We need to change a law to do it.  Because community like this is illegal in America.  In Boulder.

Our microsociety is strewn with once and future lovers.  When you come into a scene like this, you don’t just meet people, you meet the relationships between people.  You get to know their history.  Their shared passions and ongoing conflicts.  The intimate mess that is humanity.  It’s hard to hide things here.  Secrets are leaky.

If I’m going to fall in love frequently, I don’t want to lose those loves.  Maybe falling can also be way to get close for other ends.

Coliving Reinvents the Commune for a Networked Age.  I’m all for seeing this kind of cooperative, intentional scene rise outside of the traditional hippiecrunch nonsense crowd, but I hope they don’t think what they’re doing is so phenomenally new that they can’t learn from groups of people who’ve been living together for decades already…

A NYTimes article on the phenomenon of ‘Hacker Hostels’, group living situations in the Area of Bays with minimalist accommodations for nerdy collaborative types.

We’ve been trying to get the two Boulder Housing Coalition co-ops a little bit more sociably integrated lately.  Making sure that we invite them over whenever we have a get together, doing dinner guest exchanges back and forth, and the occasional joint outing.  More than half of their household (7 of 13) is turning over this lease cycle, which is hard on a co-op’s social fabric and institutional memory.  It also makes the membership process pretty daunting.  Zac planned an afternoon of volleyball.  It was blazing hot, but with a little shade and a lot of lemonade, it was fun.  Definitely looking forward to future cooperative mingling.

END_OF_DOCUMENT_TOKEN_TO_BE_REPLACED 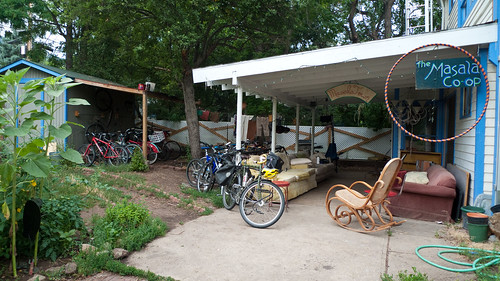 As Bryan is heading off to circle the globe in a few days I’ve had to find a new place to live.  His condo is worth more rented out in its entirety than as a combination of two rooms.  As luck would have it, there was a summer sublet (with the option to renew) open in the Masala Co-op, where I lived in the summer of 2004 (after serving on the board of the Boulder Housing Coalition, which owns the co-op houses in Boulder).

I decided to renovate my room, since I had the time, and no hard pressure to move.  I did some soundproofing between the room and the common areas, re-painted, and built myself a big sleeping loft.  Then I moved all my stuff across town by bike.

Here are some pictures of the new space, before, during and after the work.

END_OF_DOCUMENT_TOKEN_TO_BE_REPLACED 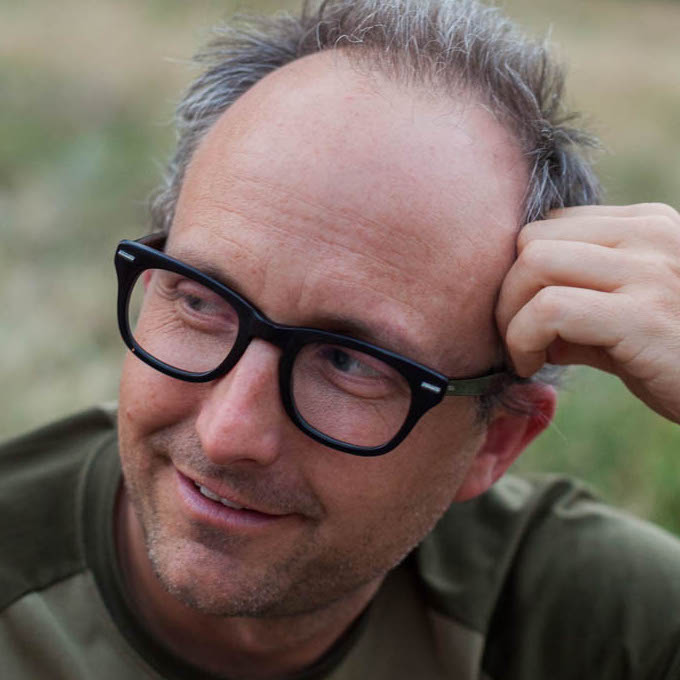